Women's issues have been making appearances in the Israeli media for decades, raising their head intermittently, before diving back below the surface. Most likely to receive attention is the question of existential security – violence against women in all its manifestations: Rape, sexual harassment, the lack of access to birth control or affordable abortions, and similar issues.

The fact that the subject of sexual harassment is now a regular presence at the top of the news agenda indicates a basic change in the rules of the game: Public figures accused of behavior that was once considered acceptable, are being forced to resign their jobs or positions.

Senior Likud minister Silvan Shalom, actor Moshe Ivgy, Knesset member and former TV anchor Yinon Magal, IDF general Ofek Buchris, Police Assistant Commissioner Ronny Ritman – to name just a few, have found themselves exposed to the media spotlight, and the fact that parallel to this coverage, women have become increasingly willing to public with their complaints of harassment has persuaded the policy to finally begin investigating what have been longstanding rumors of harassment on their parts.

Additionally, the coverage creates new opportunities to attract managerial positions men and women with values and patterns of organizational culture friendly to women in the workplace.

Similarly, the increased public interest in the system's failure to stop women from being murdered, as in the recent cases of Anastasia Rusanov in Rishon Letziyon, Magda Abu Jabber from Kfar Kasem, and unfortunately many others, (100 women were murdered in Israel by domestic violence from 2011-2015) raises hopes that the smoke screen that until recently enveloped issues of violence within the family is dissipating.

Can we assume, however, that increased media attention to such stories leads to changed social priorities? Moreover, if so, is that in turn leading to political change? Is the press, which in general does act as an agent of change vis-à-vis a variety of social issues, act in that manner when it comes to gender issues? Has the way that the media contends with women's issues – and in particular the existential problem of violence against women – reached the point of maturity and continuity that allows for real change, as is the case in other social realms?

Despite the positive changes within journalism, the organization and strengthening of women working in the field, the move by a portion of the country's male journalists to stand by the side of women in the effort to improve their status in society – there remains a sense that something is not working quite right. The interests of a group that constitutes half of the country's population – women – still have not been secured despite the fact that they have moved from the inside pages of the paper to the front page. The helplessness felt by all those who are involved in trying to improve coverage of, for example, domestic murders of women, is only intensified as they watch the use of clichés in that coverage accumulate.

When it comes to crimes, the clichéd nature of the coverage would seem to suggest that the handwriting, as it were, will continue to be on the wall for some time.

The truth is that the realities of women's lives in Israeli society have never received the attention they deserve. During the early 1920s, there was a brief period when matters related to women's politics, parallel to the establishment of the national institutions, were given prominence. That was followed, however, by a long blackout, or at least consignment to the periphery, with the focus being on the traditional roles within the family and the home -- when women's issues were covered at all.

That's how it was until the 1970s, when the question of women's rights found its place on the public agenda in Israel, in the wake of the feminist struggle – taking place in the United States.

Marcia Freedman, a member of Knesset during the mid-‘70s, and the founder of the Israel Feminist Movement, described the tendency to keep women's issues off the political agenda as a "conspiracy of silence." All of the issues she had raised in the Eighth Knesset, starting with the secret sale of arms to South Africa to the subject of violence against women, had a common denominator: All were enveloped by a conspiracy of silence. "The walls of denial were especially high when it came to women's issues, in particular when they related to women's bodies: rape and other violence, incest, teenage pregnancy, prevention of breast cancer, birth control and abortion."

Exposing the phenomenon of violence – which is the top priority among the problems facing women – was akin to trying to pull an iceberg up from under the surface. In fact, until the mid-1970s, you might have thought the problem didn't exist in Israel. Moreover, until the early part of that decade, the number of women working in journalism could be counted on one hand. To the extent that they dealt with political issues at all, they were held back from covering subjects of real significance to women, such as violence, wage disparities, representation in the Knesset, and the like.

That's when things started to change, as serious women's concerns began to make their way into the public debate via the "journalistic ghetto" of the women's pages. An item that I published in 1977 about the opening in Haifa of the country's first battered-women's shelter, by the Feminist Movement, (photo no. 1) did not appear on the front page, as a story of that kind would inevitably do today, but on the back page of the "Women's Circle" supplement of Haaretz.

Though I continued to publish first-of-their-kind pieces about battered women, women in politics and sexual harassment, these critical topics still did not begin to get regular coverage. And the publication of each one of those articles was accompanied by a struggle that could go on for weeks, months, and yes, even years.

One milestone in the history of feminism in Israel was the demonstration mounted by the Feminist Movement at the 1976 annual convention of the country's gynecologists at the Tel Aviv Hilton. We entered the hall where the physicians were meeting – I was present as a young journalist accompanying Marcia Freedman and several other members of the movement – where one of the topics on the agenda was legalizing abortion. The gynecologists, all of them male, formed a united front against such a possibility, even though many of them carried out the procedure, privately and illegally, receiving payment under the table. Publicly, however, they acted as an interested financial party for all intents and purposes.

The demonstration ended with the arrest of all 11 protesters and their release on bail; although I filed a report on the goings-on with the women's section at Haaretz, nothing appeared in the paper.

I still remember the response of the section editor the first time I proposed a story connected to the activities of my colleagues in the feminist movement: "This week, you're going to write about something serious, not about those women." I well recall the feelings of despair and helplessness that accompanied my attempts to get newsworthy subjects related to women into the public consciousness.

But even when a gender-related story succeeded in surmounting the wall of denial and was covered for the first time in the national press – the sounding of a lone voice in the wilderness does not generally lead to a massive social mobilization. More likely is that it fades into oblivion with the passage of time. 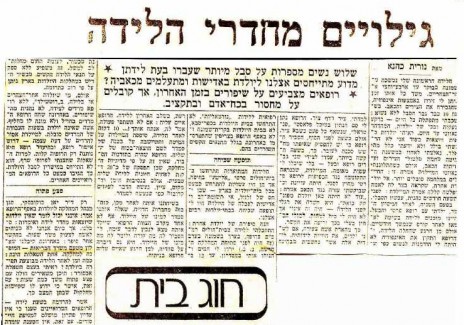 I wrote a piece, for example, about conditions in hospital delivery rooms (photo no. 2), and it did lead to a storm of interest. My report was based on my own personal experience and on those of friends, but it was only eight years after I gave birth for the first time that I succeeded in convincing my editor that it was a topic deserving of coverage. That was in 1978. Last year, 37 years after that first story, Haaretz published an article by Noa Limone on the same topic. The article was given proper treatment by the paper, but I could only be saddened to see that the problems it exposed and described were the same ones that existed in the 1970s.

An incident like that, just a single example of numerous others long forgotten, demonstrates how the introduction of women's political issues to the public agenda without suitable momentum being created to keep the topic in the public eye, isn't sufficient to bring about real social change. Without mass social activism dedicated to the process of social change being brought to bear during the stages following the initial public exposure of an issue, there will be no alternative to having to dredge the topic up over and over again from the netherworld.

This article was first published on The Seventh Eye. Read it in Hebrew here