One of the only issues to generate consensus among the Israeli press during the coronavirus crisis is the Shin Bet’s surveillance of COVID-19 patients and those they had come in contact with. Such monitoring is extreme and unnecessary, journalists protested.

Public condemnation of this surveillance has, in some ways, become a form of expressing allegiance to Israeli democracy. Reporters who have grown accustomed to attacks during Prime Minister Benjamin Netanyahu’s election campaign and his corruption trial have finally found a topic where they feel a semblance of safety — where they can take a critical position without being portrayed as enemies of the state.

Knesset members who had never been vocal on issues of the right to privacy before also spoke out against surveillance. Even former officials in the defense establishment, including recently appointed Foreign Minister Gabi Ashkenazi, expressed their criticism of the security agency’s monitoring. After Ashkenazi dared to speak up, several conservative military reporters did the same.

The High Court of Justice, which tends to keep its finger on the pulse of the Jewish majority’s opinion on such matters, accepted petitions by the Association for Civil Rights in Israel (ACRI), Adalah, and Atty. Shachar Ben-Meir. It ruled that the Shin Bet’s response to the coronavirus crisis must be anchored in legislation, rather than a set of emergency regulations that the executive branch rolled out in March. This week, the government announced it would freeze a bill that would regulate the Shin Bet’s monitoring, and thus the surveillance is expected to come to an end.

In its response to the petitions against Shin Bet surveillance, the state argued on April 12 that Israel’s Health Ministry looked into proposals by at least 10 different Israeli companies for alternatives to Shin Bet surveillance. It soon became clear, according to the state, that the technologies they offered were even more invasive than those of Israel’s security service, and involved gathering information from apps, cellular and credit companies, and even security bodies.

In 2015, human rights activists there told me about a building in Juba in which Israel reportedly installed a surveillance system. I contacted various media outlets and journalists, but no one wanted to be the first to publish or investigate the matter

The state also referred to a statement made by Yisrael Beiteinu MK Eli Avidar to the Foreign Affairs and Defense Committee’s Subcommittee on Intelligence and Secret Services on March 26: “The solution is not always found in civilian apps. Such apps can pose a far greater risk to civil rights.”In its response to the petitions against Shin Bet surveillance, the state argued on April 12 that Israel’s Health Ministry looked into proposals by at least 10 different Israeli companies for alternatives to Shin Bet surveillance. It soon became clear, according to the state, that the technologies they offered were even more invasive than those of Israel’s security service, and involved gathering information from apps, cellular and credit companies, and even security bodies.

It would be an understatement to say that most journalists who were horrified by the monitoring of Israeli citizens could not care less about the daily surveillance of Palestinians on both sides of the Green Line. Much of Israeli media also continues to ignore the story of how these surveillance technologies are exported to non-democratic countries, where states of emergency are a permanent feature of life, and where these technologies can be used to take away freedoms and sometimes even cause physical harm.

It is disappointing to witness the media behave this way. Israeli reporters could have asked a simple question: if not a single Israeli company offers a less intrusive surveillance system than the Shin Bet, why do the Foreign and Defense Ministries grant licenses to export those same surveillance tools to countries that are known to violate human and civil rights?

The silence of the press can be explained by the fact that raising this question would inevitably lead to a confrontation with the Defense Ministry, which serves as an inexhaustible and central source of information for Israeli reporters. In a country where security-related stories form the crux of almost all news in major media outlets, there are only a few brave editors and journalists who are willing to take risks, possibly burn bridges and lose sources, and subject themselves to sanctions. 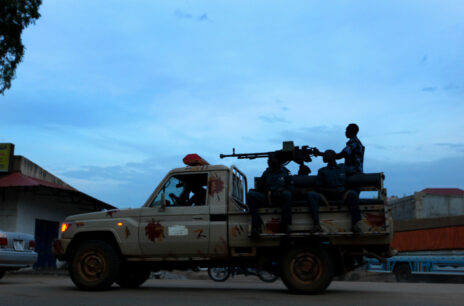 Sudanese soldiers seen patrolling the streets of Juba, the capital of the Republic of South Sudan. August 20, 2011. (Photo by Moshe Shai)

In early 2015, about a year after the civil war broke out in South Sudan, human rights activists there told me about a building in Juba in which Israel reportedly installed a surveillance system. I contacted various media outlets and journalists, but no one wanted to be the first to publish or investigate the matter. Eventually, blogger and linguist Dr. Idan Landau agreed to run the story on his blog.

A year later, on Jan. 22, 2016, a United Nations Security Council panel of experts on South Sudan released a report confirming that the surveillance system was indeed purchased from Israel following the outbreak of the civil war. The panel also asserted that the system was used to carry out grave human rights violations and political persecution by the National Security Service (NSS). According to the report, the NSS carried out arbitrary arrests, torture, murder, disappeared those affiliated with the opposition, and operated “death squads.”

Based on reports by both the United Nations Mission in South Sudan and the African Union, the law in South Sudan forbids the NSS from making arrests on its own, permitting it only to engage in intelligence gathering. Yet the organization has persecuted, detained, and harassed journalists and human rights activists. The reports state that illegal arrests, torture, and disappearances are part of a systematic and widespread policy of the South Sudan government, amounting to crimes against humanity.

In May 2016, I filed a petition alongside Meretz MK Tamar Zandberg to revoke the Defense Ministry’s export license for the surveillance system to South Sudan. Both the petition and the reports that informed it hardly made a dent in Israeli media. Other members of Knesset were not interested in the matter, and the High Court issued a gag order on the ruling.

As far as we know, the surveillance system remains in South Sudan to this day. The name of the company operating the system has never been revealed.

Imagine a scenario in which reporters actively look into the use of an Israeli surveillance system in South Sudan. Newsrooms would send reporters to Juba, while media personalities would tweet condemnations and demand answers from both the company operating the monitoring system and the Defense Ministry. Members of Knesset, too, would publicly criticize the ministry, and the Knesset would hold a fierce debate on the issue. The High Court would gauge public opinion and conclude that it should issue a verdict open to the public, which would be full of poetic language on the right to privacy and public safety in South Sudan.

The Israeli surveillance system in South Sudan is only one of many examples of local media’s near-total disregard to Israel’s arms exports, often to regimes that routinely violate human rights. And when the issue nevertheless comes up in public discourse, rather than pursue critical and independent investigations, coverage is usually limited to referencing reports in international media outlets.

One would think that Israeli media’s almost overwhelming opposition to Shin Bet surveillance of COVID-19 patients would also influence its position on exports of such surveillance systems. In the wake of the pandemic, numerous articles were published by philosophers, futurists, and publicists explaining why and how everything will change after the coronavirus. But there is one thing that even a deadly virus will not be able to change: the interests of Israeli media.

This article was first published on The Seventh Eye. English translation by 972mag.com. Read it in Hebrew here​